Refer a Patient Request an Appointment 800 USC-CARE Donate myUSCchart
Home / Blog / Patient Stories / It Started as a Headache. 28 Days Later, She Was Finally Able To Leave the ICU
Patient Stories

It Started as a Headache. 28 Days Later, She Was Finally Able To Leave the ICU 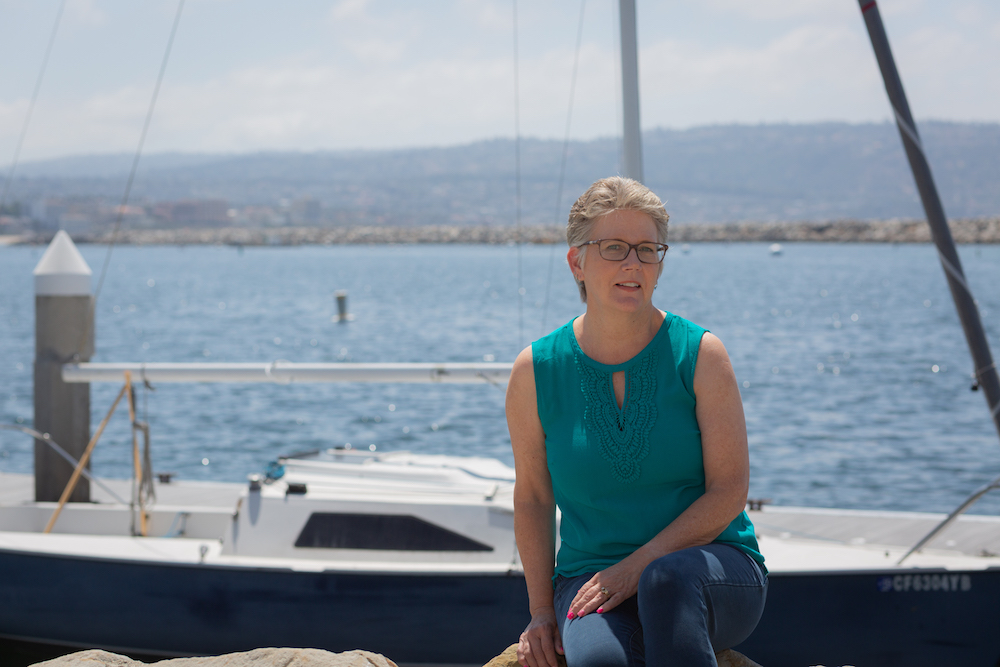 In the summer of 2016, Laura Priest’s busy life came to a halt, when a ruptured brain aneurysm landed her in the intensive care unit and wiped 28 days from her memory.

At 56 years old, Laura Priest — a mother of two, a wife and an office manager — was always on the go, navigating her busy personal and professional life. Each morning began with helping her family get ready; and once her son, Ryan — a young man with special needs; her teenage daughter, Katy; and her husband, Tom, were all taken care of, Laura would head over to the King Harbor Yacht Club in Redondo Beach, where she’s worked for several years.

In the days leading up to her hospitalization, Laura labored under severe pain from a series of headaches — not an uncommon occurrence for her, since she’s had migraines throughout her life.

The difference this time around, as Laura recalls, was that her migraine medication didn’t make a dent in the pain. Concerned, she visited her local hospital’s emergency room two days in a row but, given her history of migraines, was ultimately sent home.

Laura was advised to visit her neurologist, and on the morning of her appointment, she vaguely recalls saying goodbye to her husband. But, that’s where her memory stops. Laura doesn’t remember the rest of what happened that day.

In fact, what she now knows about the ensuing hours — and the 28 days that followed — Laura has had to piece together from the accounts shared by her family, friends and medical team.

Not a standard aneurysm

Laura never actually made it to her neurologist’s office. She was found hours later, still in bed and incoherent, by her daughter, Katy, who immediately called 911.

By the time Laura was transported to the hospital, she had lapsed into a coma, and tests revealed the cause: a ruptured brain aneurysm.

An aneurysm is a weak spot in one of the brain’s arteries that can collect blood, oftentimes creating a bulge or balloon. If it ruptures, it can cause a host of complications, including strokes, brain damage, coma and, in the most extreme cases, death.

Given the complexity of Laura’s condition, she was transferred to the care of specialists at Keck Medicine of USC.

“And that’s where I was blessed that Dr. Russin was the one on duty at the time,” she says.

Jonathan J. Russin, MD, a neurosurgeon at Keck Medicine of USC, director of cerebrovascular surgery at Keck Hospital of USC and assistant professor of clinical neurological surgery at the Keck School of Medicine of USC, explains that in addition to the usual risks associated with a ruptured aneurysm — stroke, permanent cognitive damage and even death — Laura’s condition was further complicated by the shape of the aneurysm and its location along the posterior inferior cerebellar artery (PICA) — an artery that supplies blood to part of the brain.

“If you think of the brain as a sort of mirror of itself, you have your right half and the left half, and then the blood vessels kind of mirror each other on both sides,” he explains.

When treating a patient with a rupture along the PICA, Russin and his team assess if a side-to-side bypass between the mirroring vessels is possible. This type of procedure allows them to reroute blood flow from the damaged artery to the healthy one and then clip or close the rupture, preventing it from rebleeding. But, imaging of Laura’s brain revealed a variation in her anatomy.

“Her arteries weren’t anywhere close to each other,” Russin says. “Usually they come very close to one another, in one particular location of the brain, but for her they did not.”

Laura also had what is called a dissecting aneurysm, which is a rupture caused by a tear along the length of the inner wall of the artery. Treatment for this type of rupture is complex, which is why the team at the USC Cerebral Revascularization Center includes experts trained in microvascular surgery.

To mend Laura’s rupture, Russin collaborated with Joseph Carey, MD, a surgeon at Keck Medicine, who specializes in microvascular and plastic surgery, and associate professor of clinical surgery at the Keck School. Together, the two surgeons designed an innovative strategy, using a graft from Laura’s femoral artery, which is a large artery in the thigh.

“For Laura, we chose to use a branch of her femoral artery, because of its size, length and inconspicuous scar location on the leg,” Carey adds.

Another key goal of Laura’s treatment plan was preventing a common risk for aneurysm patients: strokes. Conventional treatment for a ruptured aneurysm may require closing off blood flow to the affected vessel, which can, in turn, increase a patient’s risk of stroke.

As Russin explains, a stroke is oftentimes accepted as a potential side effect to prevent the greater dangers and higher mortality rate associated with another rupture of the damaged vessel.

“What we try to do is get rid of the aneurysm but still prevent the patient from having a stroke. But, that does require quite a bit of advanced microvascular surgical skill and a big team of people to do it,” Russin says.

A new lease on life

After surgery, Laura regained consciousness and has been told by her family and medical team that she was able to recognize and interact with everyone. However, she does not remember anything that happened in the 28 days she spent in the ICU.

“These types of memory disruptions can occur as a result of a ruptured aneurysm, but it’s not really understood what causes them,” Russin says.

Following her release from the hospital, Laura received several weeks of physical and occupational therapy and steadily began reengaging in the hustle and bustle of her life.

She remains ever grateful to Russin and the team at Keck Medicine, whom she credits with saving her life.

“I wouldn’t be here without them. I am just so thankful, and Dr. Russin is the most amazingly wonderful, kind and friendly human being, as well as being my savior,” she says.

Even though she lost 28 days from her memory, Laura describes her survival and recovery as miraculous — an observation that’s not too far off the mark, in light of the statistics associated with ruptured brain aneurysms.

According to data from the Brain Aneurysm Foundation, approximately 50% of ruptured aneurysms are fatal, and about 66% of survivors experience some level of permanent neurological impairment. Laura not only defied the odds, by surviving the rupture, she also came through the ordeal without any permanent neurological deficits.

For his part, Russin commends Laura’s determination and courage throughout a very challenging journey.

“This is a really hard thing to go through. You have to have a real significant inner drive to get all the way back to your life. And that’s Laura. She’s a very driven person. She’s really very impressive.”

Laura keeps in touch with Russin, and she has joined fellow aneurysm survivors on the Keck Medicine team at the Los Angeles Marathon.

Now an empty nester, she remains optimistic about what the future holds for her family.

By donating a part of her liver, one woman gave someone else the gift of better health. Both transplant participants...
Read more

When Blindness Attacks: How Research and Cutting-Edge Clinical Techniques Saved...

Vanessa Ho was just beginning her Saturday morning when she suddenly felt intense pain and blurry vision in her right...
Read more

The Corneal Correction: How a Specialty Scleral Lens Restored a...

Three years ago, an outside clinic diagnosed Maria Contreras with keratoconus, a degenerative eye disease that causes thinning and bulging...
Read more

The Ability to Blink: How Oculoplastics Saved a Burn Victim’s...

When Joe Cruz had a car accident in Northern California, burn marks left his face so devastated that he lost...
Read more

5 Signs Your Headache Is Not Normal

See your doctor as soon as possible if you experience any of these troubling symptoms. We all get headaches from...
Read more
navigate_before Previous navigate_next Next
calendar_todayRequest an Appointment phoneCall Us: (800) USC-CARE searchFind a Provider placeFind a Location