Is Your Mole Cancerous? 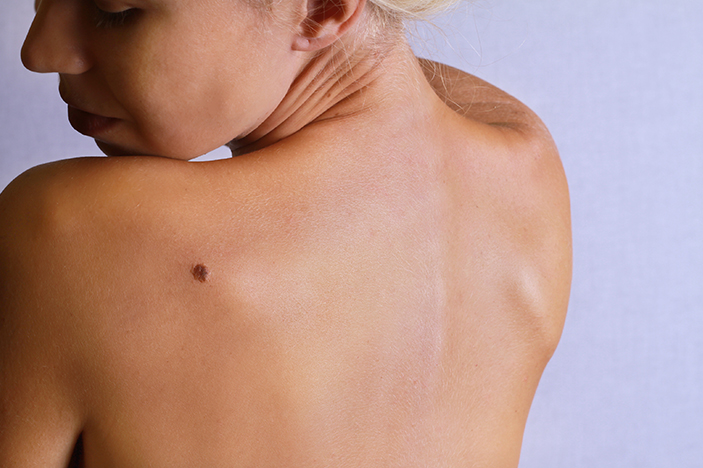 Sometimes a mole is a mole. Other times, it’s cancerous. How can you tell the difference?

Moles are common, even in children. Some darken, others remain light in color. Almost every adult has a mole, and some have as many as 40 on their skin. But moles can also be indicators of melanoma, a form of skin cancer.

“We are trained to identify moles that may be indications of skin cancer,” Peng details, in an interview with media site ATTN.

How do you know if your mole is okay? Peng suggests following the Skin Cancer Foundation’s ABCDE method for detecting warning signs of melanoma:

A – Asymmetry
Is your mole round, or is it oddly shaped? An asymmetrical mole is a clear warning sign for melanoma.

B – Border
Moles that are uneven and irregular in shape or have a faint edge or border should be checked out.

C – Color
Moles that are multicolored, red, white or blueish-black can signal melanoma. Most benign moles are one color.

D – Diameter
Worrisome moles can start small but tend to grow larger than the diameter of a pencil eraser.

E – Evolving
Does your mole change in size, color, or shape over time? Does it bleed, itch, or crust over? These are indicators that it could be melanoma.

According to Peng, people who are fair-skinned, burn easily or have a large number of moles are at higher risk for the disease. Even so, he also highlights that “a mole can meet all five of the ABCDE criteria and not be dangerous.”

If your mole is cancerous, the good news is early intervention can eliminate the cancer or prevent it from spreading.

“When caught in the early stages, melanoma very rarely goes outside of the skin and is highly curable,” Peng says. “Your dermatologist or dermatologic surgeon will be able to surgically remove the cancer using local anesthesia.”

3 Key Facts About Skin Cancer in People of Color

Dr. Nada Elbuluk Talks About Dermatology Care for People of

Rod Hanners, CEO of Keck Medicine of USC, talks with the director of the USC Skin of Color and Pigmentary...
Read more

Dr. Elbuluk is a dermatologist at Keck Medicine of USC, who specializes in skin of color and pigmentary disorders. Here’s...
Read more

How These 4 Skin Conditions Impact People of Color

When it comes to ethnic skin, there are unique issues to consider. As anyone with combination skin can tell you,...
Read more

Is There Any Kind of Tan That’s Safe?

Whether you tan indoors or outdoors, you increase your risk for skin cancer. Sun-kissed. Bronzed. Healthy glow. We’ve come up...
Read more
navigate_before Previous navigate_next Next
calendar_todayRequest an Appointment phoneCall Us: (800) USC-CARE searchFind a Provider placeFind a Location