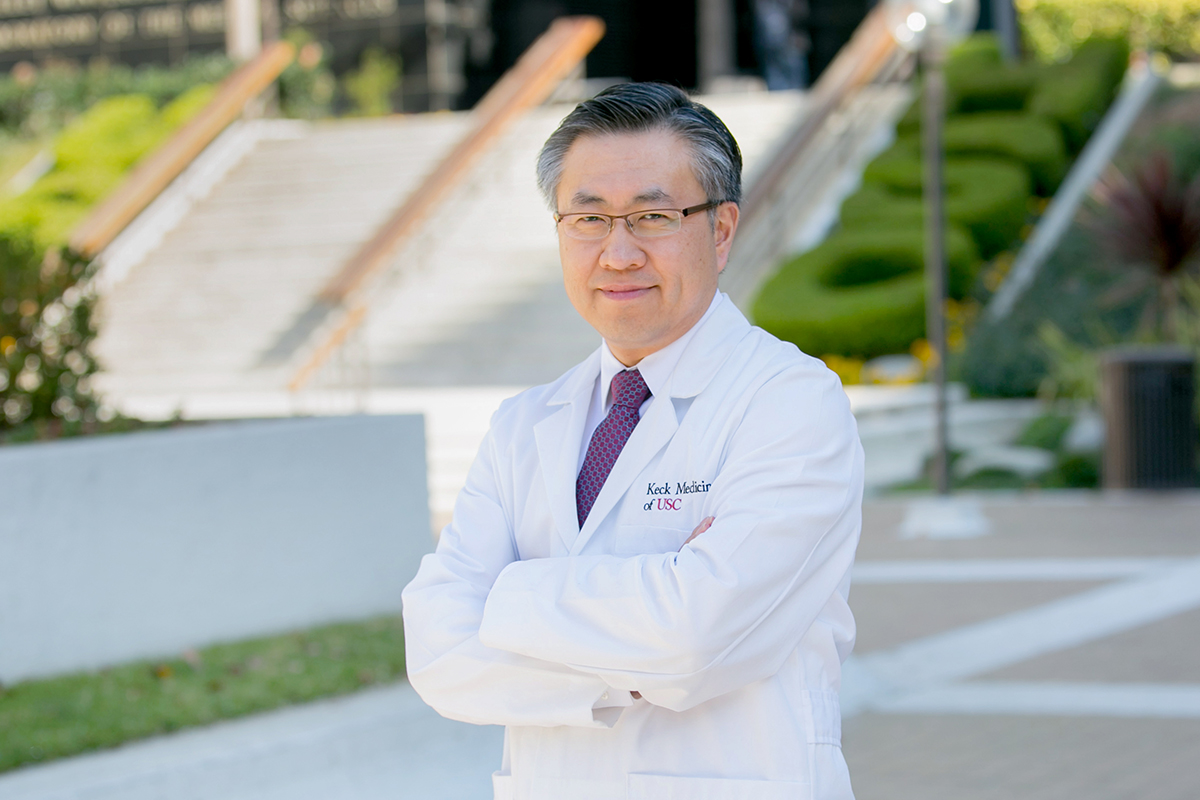 Dr. Ahn is a medical oncology specialist at Keck Medicine of USC.

Here’s what you won’t find on his resume.

He considered a career in sports medicine.

“Because I love soccer so much, I wanted to become a soccer team doctor. I thought the job would allow me to watch the game from the bench and get to personally know the players, so I seriously considered majoring in sports medicine.”

Travel and sports are his go-to pastimes.

“When I’m not working, I like to travel to different developing countries and deliver medical care as part of a Christian medical mission team. On the weekends, I enjoy watching Premier League soccer games.”

Most people would be surprised to learn of his fluency in a variety of languages.

“Although I was born and raised in South Korea, I lived in Taiwan for four years and became fluent in three languages: Korean, Mandarin and English. While I have lost many of my skills in speaking Mandarin, I still understand some of the spoken language.”

“I love the movie ‘The Lord of the Rings.’ It’s amazing how they made such a spectacular movie with the film technology available in the early 2000s. I watched the film with my children, when they were growing up, and I’ve probably seen it more than 100 times.”

His relationship with his patients is the most rewarding part of his job.

“The most fulfilling aspect of my work at the USC Norris Comprehensive Cancer Center is the relationship I build with my patients. Bonding with them brings me joy and energy. Cancer is a difficult disease to fight, but I tell my patients that no matter what challenges come our way, we will face them together.”

Here’s his advice for students considering a career in oncology.

“I would tell medical students who want to specialize in medical oncology to always focus on patient care. While you may not be able to cure the cancer, you can always help your patients get the treatment and support they need.”

These are the improvements to cancer care he would like to see come to fruition.

“I would like to see cancer disease management give patients a better quality of life over time. For example, I would like to see distant metastatic cancer — a type of cancer where the original tumor has spread to distant organs or lymph nodes — managed like a chronic illness that the patients can live with for many years.”

Dr. Nguyen is a medical oncologist at Keck Medicine of USC, who specializes in gastrointestinal and lung cancers, as well...
Read more

Dr. Ghani is a medical oncologist at Keck Medicine of USC, who specializes in treating a wide range of blood...
Read more

Dr. Hanna is a medical oncologist at Keck Medicine of USC, who specializes in gastrointestinal cancers and clinical trials. Here’s...
Read more

Dr. Angstreich is a medical oncologist and hematologist at Keck Medicine of USC, who specializes in the treatment of all...
Read more

Dr. Shin is a podiatrist, foot and ankle reconstructive surgeon and wound care specialist at Keck Medicine of USC. Here’s what you...
Read more

Breast Cancer Symptoms: What Should You Know?

Learn about the symptoms of breast cancer and what to look for to protect yourself against this disease. Breast cancer...
Read more
navigate_before Previous navigate_next Next
calendar_todayRequest an Appointment phoneCall Us: (800) USC-CARE searchFind a Provider placeFind a Location