Myth or Fact: Only Women Get Breast Cancer 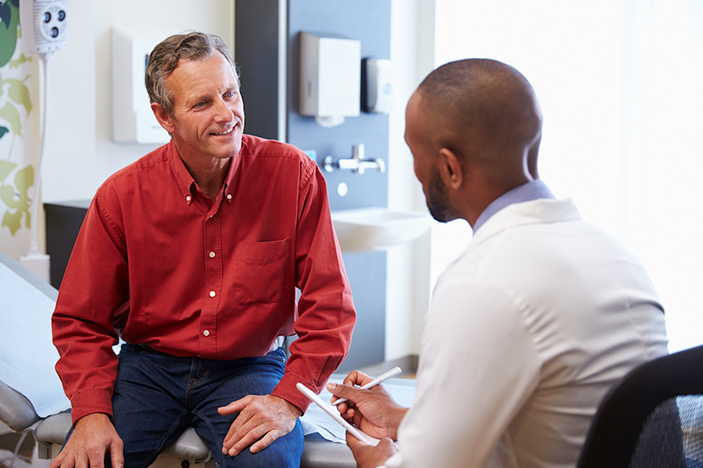 If you guessed myth, you’re correct. Like women, men have breast tissue and, therefore, are also at risk for breast cancer.

Breast cancer doesn’t play favorites, when it comes to choosing its victims. Based on statistics from the American Cancer Society (ACS), in 2018, nearly 2,670 new cases of invasive breast cancer will be discovered in men, and about 500 of these men will die of the disease.

Although male breast cancer is uncommon, the risk factors are similar to those for women, and if detected in time, can be treated effectively.

What increases my risk for male breast cancer?

As you grow older, your risk for breast cancer increases. In men, the average age of diagnosis is 68. Other risk factors include:

What are the symptoms?

The most common symptoms of male breast cancer are:

If you have any of these symptoms, your doctor may order a mammogram or ultrasound. If the test uncovers an abnormality, your doctor will most likely order a biopsy to determine treatment.

The biggest mistake that men make when they think they have breast cancer is to wait before seeing a doctor. In fact, one study found that the average time between the first symptom and diagnosis was 19 months. Time is key; the earlier the diagnosis, the more treatment options available and the greater chance of survival.

“While breast cancer in women is widely publicized, there is a general lack of knowledge that men can also get breast cancer,” says Jason Ye, MD, radiation oncologist at USC Norris Comprehensive Cancer Center of Keck Medicine of USC and assistant professor of clinical radiation oncology at the Keck School of Medicine of USC. “Furthermore, men may feel stigmatized at the idea of having breast cancer, a disease attributed to women, feel confused, alone and depressed. These factors contribute to delays in seeking medical help from the doctors and allow the disease to progress to a higher stage before treatment.”

What are the treatment options?

Treatment depends on the size, location of the tumor and how advanced the cancer is. Possible treatments include anti-estrogen and chemotherapy, surgery and radiation therapy.

“In a national database study I conducted in 2015, there were no significant changes in male breast cancer treatment from 1998 to 2011,” Ye says. “However, the same study also showed that male breast cancer shares many similarities to female breast cancer. Its prognosis is closely related to the grade (how aggressive the cells appear under the microscope), histology (the type of cancer cells), stage of the disease and presence of estrogen receptors on the cells.

“Thus, thanks in part to the advances in research for breast cancer in women, with survival rates climbing as new technologies and treatments are discovered, there is hope for men with breast cancer as well.”

For 40 years, the National Cancer Institute has recognized USC Norris Comprehensive Cancer Center as one of the leading comprehensive cancer centers in the country.

Breast Cancer Symptoms: What Should You Know?

Learn about the symptoms of breast cancer and what to look for to protect yourself against this disease. Breast cancer...
Read more

5 Helpful Mammogram Facts Everyone Should Know

Misinformation surrounding mammograms can lead to anxiety. Get the facts about this important part of preventive care. It’s not uncommon...
Read more

Dr. Ye is a radiation oncologist at Keck Medicine of USC, who specializes in a wide array of advanced radiation...
Read more

What You Need to Know About 3D Mammograms

3D mammography is the latest innovation in breast cancer screening technology, but how is it different from traditional 2D screening?...
Read more

5 Questions to Ask at Your Next Physical

The right question can reveal a lot about your health. Your annual checkup is more important than you may think....
Read more
navigate_before Previous navigate_next Next
calendar_todayRequest an Appointment phoneCall Us: (800) USC-CARE searchFind a Provider placeFind a Location